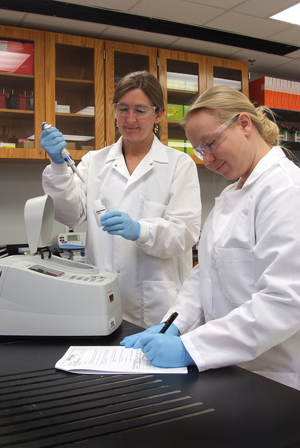 Over the past decade, Florida has made significant efforts to anchor the biotechnology industry as an economic driver in the state. Included in these efforts was the establishment of Biotility, an education and training center at the University of Florida’s Center of Excellence for Regenerative Health Biotechnology (UF CERHB).

Biotility designs and develops multi-level workforce training programs aligned with the growing and maturing needs of the industry. State and federal initiatives were instrumental in funding and structuring the development of these programs, as well as forming the basis for a strategic, statewide planning partnership between business, professional societies, state and local government agencies, and the education community. Outcomes include a secondary program in Industrial Biotechnology with an integrated industry credential, and a statewide articulation agreement.

A hybrid academic/CTE secondary program in Industrial Biotechnology (#8736000) was developed by Biotility and its partners through the NSF PFI-funded Florida Partnership for Industrial Biotechnology (FPIB), and was approved by the Florida Department of Education in December 2007. Designed to teach complex concepts in science through hands-on techniques used in research and by the industry, these high-impact courses have changed the state’s educational infrastructure, which previously did not include coursework specific to careers in the bio-industry. Students in these courses contextualize and apply scientific principles to the myriad of layers and activities found along the product development continuum, and they learn of the education and career pathways available to them.

Florida was recognized in 2008 by the U.S. Department of Education (DOE) as being at the forefront of biotechnology education, and was one of six states to receive funding through the “Developing Rigorous Programs of Study (RPOS)” grant program. Working with the Florida DOE Division of Workforce Education, Biotility assembled The Florida Biotechnology Articulation Consortium (FBAC) to streamline career paths of students participating in the state’s rigorous secondary biotechnology program, and to provide multiple entrance and exit points leading to a range of career opportunities. The timing was perfect, as the Florida Legislature had recently passed the Career and Professional Education (CAPE) Act (FS 1003.491, 2007), with a primary purpose of improving middle and high school academic performance by providing rigorous and career-themed courses that articulate to postsecondary coursework and lead to industry certification(s).

The Florida industry-recognized Biotechnician Assistant Credentialing Exam (BACE) was developed to document student understanding of core theoretical knowledge and practical applications delineated in the academic and performance standards of the secondary Industrial Biotechnology program, which was developed utilizing industry input (Banner Center for Biotechnology Needs Assessment, 2007).  The exam consists of a written component (available online) and a proctored, practical component designed to assess hands-on skills and techniques. The exam has been vetted by Florida’s trade organization BioFlorida. Committee members representing a diverse range of biotechnological applications provided feedback on the scientific accuracy of exams questions and their accuracy and fit within the academic and performance standards, along with overall thoughts on how well the exam reflects the knowledge and skill base for a basic/entry-level position. The Biotechnician Assistant credential was approved by CareerSource Florida in 2011 and added to Florida’s “Comprehensive Industry Certification List for the Career and Professional Education Act.”

The BACE also serves as a mechanism for statewide articulation into Florida colleges’ associate degree programs in Biotechnology and was approved by the state board of education in January 2012. Since its launch during the 2011–2012 school year, 387 students have taken the exam, with a pass-rate of 69 percent. Based on a 2014 survey of credential earners, 95 percent of respondents have either found employment or entered postsecondary education. Due to the prior rigor of the secondary coursework, most (93 percent) had already planned to enter bachelor’s-level programs, with 83 percent entering disciplines in the biosciences. Of these students, 20 percent planned to continue to master’s degrees, 43 percent to doctorates, and 15 percent to professional schools. Sixty-five percent of the students also planned to work while in school, and felt that earning the credential was beneficial to finding employment.

One example is Kelsey Tatum, who passed the BACE in 2013 and is currently a sophomore at Florida State University in the honors college. As a freshman she became active in research related to nitrogen fixing bacteria, a phenomenon that is crucial to the turnover of crops. Her previously established skills made her an asset to the lab, where she now holds a paid research position. As a biotechnology student at Ponte Vedra High School, Kelsey worked on an independent research project that employed PCR (polymerase chain reaction) to detect evidence of environmental DNA for antibiotic resistance. 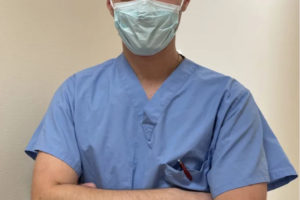 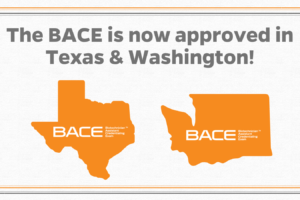 BACE Approved in Texas and Washington! 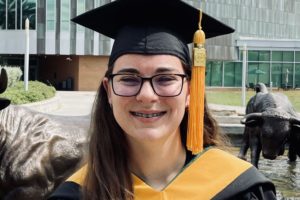